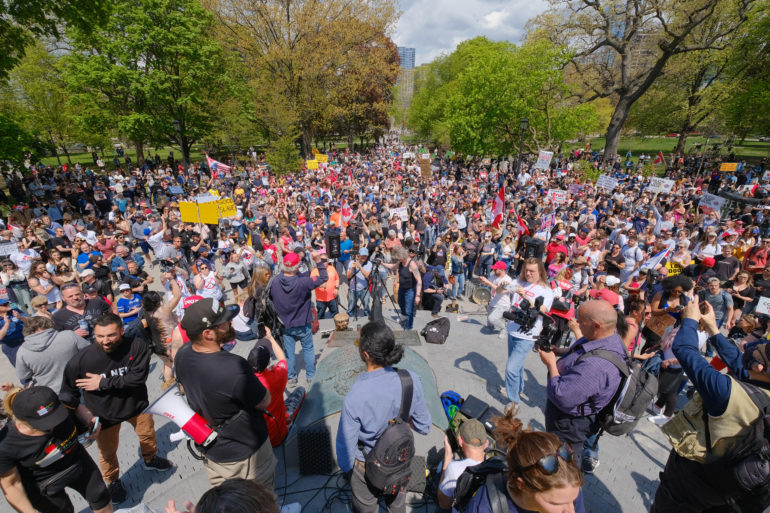 The Tale of 3 Gatherings

Watching CP24 this past weekend, I witnessed the brain washing psychosis that is our state-controlled propagandist media. Live and in real time. There were three protests/gatherings in Toronto and they were shown in back-to-back to back segments. The media was able to eloquently demonstrate their ability to propagandize completely conflicting narratives while the masses freely accept the contradictions and narratives presented.

The first segment was about the “dangerous” freedom protests. A police constable joined the segment to discuss how dangerous these peaceful protestors were with respect to public health and safety and COVID safety protocol. He assured the viewers that such activity will not be tolerated and arrests will be taking place over the coming days and weeks.

The second segment discussed the sometimes violent Israel/Palestine protests in Toronto. Despite some hate-inspired unruliness police didn’t threaten the citizens or disperse the massive crowds. They instead worked diligently to keep the protestors separated and enforced the importance of allowing peaceful protests in Canada. Ironically, this segment did not have a single mention of COVID or public health.

The third segment was focused on a massive gathering at a no appointment required vaccine clinic in Toronto. 1000’s and 1000’s of people aggregated and lined up to receive their vaccine. The crowd was so large that the wait time could exceed 1-2 hours. This gathering was of course shown as righteous, and presenting zero threat to public health and safety. The audience was encouraged to come out and join
Ironically enough, the masses will read the above, and will both not understand what point I am trying to make, as well as, personally insult me for even daring to make such a point.

You can listen to Andrew Rouchotas’ podcast about this topic at https://ch1.ca/the-jackals-are-out-in-full-force/

Andrew Rouchotas is the CEO of Cartika (www.cartika.com) and the founder of the CH1.ca free speech platform.