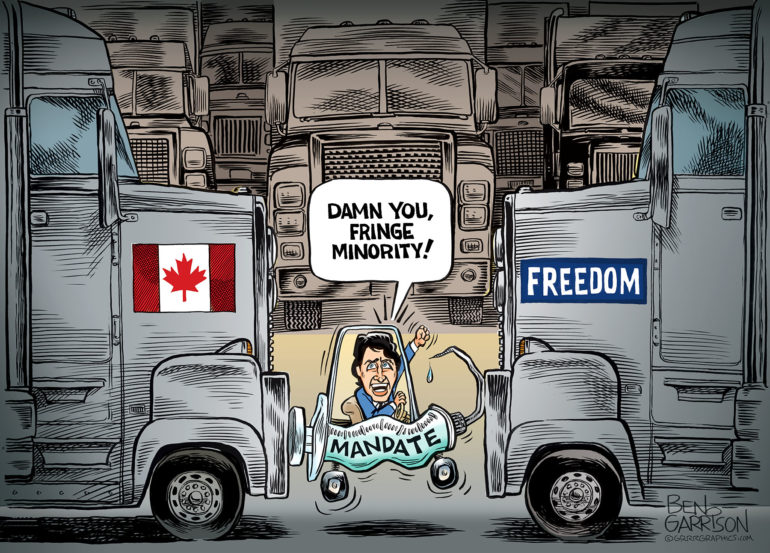 A list of the most absurd things to have happened in recent weeks.

• BMO and the Government of Canada freezes Druthers’ bank account and credit card. Donorbox also cancels a Druthers’ campaign. On February 14th, the day the Emergencies Act was invoked, BMO froze the only bank account Druthers uses for the “crime” of directly financially supporting the truckers, citing a Facebook post made by creator Shawn Jason as part of their evidence.  Donorbox also removed the Druthers-Truckers campaign from their platform. As of February 28th, Druthers’ bank account is still frozen. If you can, please help us pay the printing bill by sending an etransfer to our new account at info@druthers.net

• Ottawa Police partnered with Children’s Aid Society to “protect” the children of the truckers convoy. Ottawa police Deputy Chief Steve Bell said risks to children living among the convoy include carbon monoxide, noise levels, cold (since the police literally stole the truckers’ fuel right out of their hands) and access to sanitation (since public restrooms had been shut down).

• Canadian lawmakers officially approved the Emergencies Act for the first time in Canadian history, making the Ottawa freedom protest an illegal protest. The invocation of the act resulted in the biggest police operation in Canada’s history. During a 3-day operation, Ottawa Police deployed pepper spray and stun grenades to disperse crowds, towed away over 70 vehicles, and arrested 191 people, bringing a total of 389 charges against 103 of them. Three of the protest organizers were arrested with “mischief” and some were denied bail. More than 200 bank accounts worth nearly $8 million were frozen. The order also authorized police to designate certain areas, including the streets around parliament hill, as restricted red zones to prevent protests.

• 3 days after marking a peaceful protest as illegal and shutting the protest down with the largest police operation in Canadian history, Trudeau says Canada will “stand against authoritarianism” in a speech announcing sanctions against Russia.

• Crazed, driver wearing a mask alone in his car, plowed his vehicle into peaceful freedom protesters in Winnipeg, injuring 4.

• Threatening posters listing the names and personal information of hacked GiveSendGo convoy donors appeared all over the streets of Ottawa following the Ottawa RedZone Lockdown. The posters, titled “Know Thy Neighbour,” included a list of local donors’ names, email addresses, and amounts given. Some flyers even showed up on the front doors of listed donors’ homes.

• France deactivates 4 million vaccine passports of double jabbed users for not being up-to-date on their boosters.

• The CDC has admitted it is withholding COVID booster data over “fears the information could be misinterpreted.”  Kristen Nordlund, a CDC spokeswoman, said the reason some data has not been released is “because basically, at the end of the day, it’s not yet ready for prime time.” But another reason is that the data could be misinterpreted by the public, Nordlund admitted. Among the data that has been collected but not made public is: hospitalizations broken down by age, race and vaccination status over the last year and information on the effectiveness of booster shots in people under 50.

• Ottawa’s interim police chief Steve Bell warned Canadian citizens that anybody who supported the peaceful Freedom Convoy will be hunted down. “If you are involved in this protest, we will actively look to identify you and follow up with financial sanctions and criminal charges,” Bell warned. “This investigation will go on for months to come,” he added.

• Bombshell article published to Frontiers in Virology titled “MSH3 Homology and Potential Recombination Links to SARS-CoV-2 Furin Cleavage Site” finds that the novel furin cleavage site (the part of SARS-CoV-2 found on the spike protein that allows the virus to enter cells, particularly lung and airway cells, and thus allows the virus to be highly infectious) was absent “from any eukaryotic or viral genome in the BLAST database”—meaning, nothing like it has ever been sequenced in the natural world. This, as the authors put it, “makes recombination in an intermediate host an unlikely explanation for its presence in SARS-CoV-2.” The string of letters that make up the furin cleavage site, CTCCTCGGCGGGCACGTAG, can, however, be found in one place: patent 9587003 by Moderna.

• The incredible powers that Prime Minister Justin Trudeau has given his government to freeze people’s bank accounts is based on an “analysis” from the CBC (who coincidentally receives 1.4 billion dollars a year from the federal government). This is according to a document detailing the supposed rationale for invoking the Emergencies Act. The document justified the financial measures based on a CBC article “which indicated that the majority of the donations to the protests on GiveSendGo were made by donors outside of Canada.”

• After canceling the $10 million trucker convoy fundraiser, GoFundMe planned to reallocate the funds raised to charities of their choosing. Fortunately, GoFundMe relented after backlash and refunded all donors.

• After heavy use of these products since 2020, Health Canada recalls nearly 50 hand sanitizers, primarily due to elevated levels of impurities that the health agency says “may increase the risk of cancer.”

• French court rules a vaccine death as a suicide so an insurance company doesn’t need to pay out because “he voluntarily took the vaccine” and side effects of an experimental vaccine were public. “There is no law or mandate in France forcing him to be vaccinated. Therefore, his death is essentially suicide.“

• After Austria became the first European country to mandate the COVID vaccine for the entirety of its population, Austrians are now being stopped randomly by authorities and forced to prove they are vaccinated or they will be fined on the spot. Footage has already emerged of police patrolling shops and highways checking people’s vaccination status. Anyone found not to have two vaccines plus booster(s) (if not vaccinated within a 180 day period) will be fined €600 ($860 CAD), with subsequent violations reaching up to €3,400 ($4,872 CAD).

• A study by Johns Hopkins titled “A Literature review and Meta-Analysis of the Effects of Lockdowns on COVID-19 Mortality” finds lockdowns had little to no effect. They concluded: “lockdowns should be rejected out of hand as a pandemic policy instrument.”

• New study published on January 25th, 2022 in JAMA Network finds one’s myocarditis risk after the COVID vaccine is at least 133x above the background risk—but is likely much higher due to the passive nature of the reporting system the study used, and the fact that 96% of those studied were hospitalized (meaning many may have had the condition but did not seek medical attention). The study also notes comparisons with the benefits of the vaccine is now completely irrelevant since vaccination no longer prevents infection.

• A Mohawk woman who uses a walker was trampled by Ottawa police horses, breaking her clavicle and injuring her ribs, hip, and back. When the Ottawa police responded to the concerned public about the incident on Twitter, they claimed “Anyone who fell got up and walked away. We’re unaware of any injuries. A bicycle was thrown at the horse further down the line and caused the horse to trip. The horse was uninjured.” The “bicycle” they are referring to appears to have been the lady’s walker.

• While the biggest police operation in Canadian history took place in Ottawa to remove those protesting vaccine mandates, Ottawa police themselves were exempt from the vaccine mandate.

• One of the most triple vaccinated countries in the world (where about 55% are boosted) and the case study country for the Pfizer vaccine, Israel, sees the biggest spike in COVID cases, hospitalizations, and deaths the country has ever seen.

• For 2 years we were told that mRNA vaccines degrade within the human body in a few hours, days at most, and that the spike proteins they generate would also be gone in days or hours. New peer-reviewed study published in CELL (Roltgen et al.) finally reveals what we knew was likely all along: the mRNA and the spike protein found in the vaccination may actually last beyond 8 weeks (and likely longer since the study only lasted 8 weeks).

• Emergency room visits for eating disorders among 12- to 17-year-old girls doubled during the coronavirus lockdown, according to new research from the CDC. There were also more visits for depression and obsessive-compulsive disorder among teen girls in 2021.