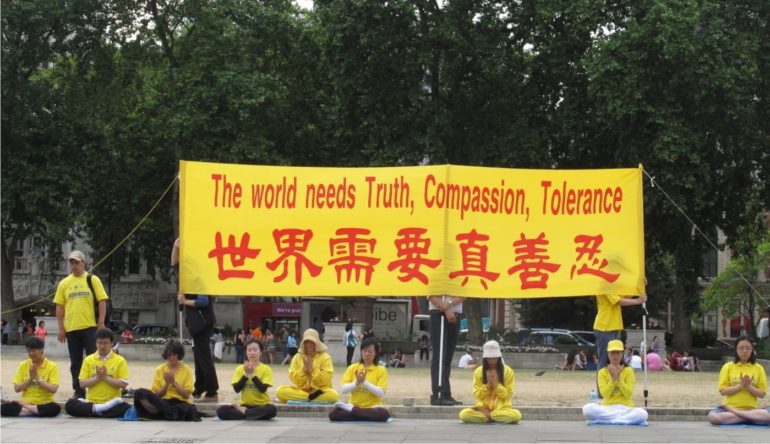 Falun dafa is a qigong meditation practice that has been spreading in China since 1992 and has also made its way all around the world teaching people how to truly cultivate the mind and body in miraculous ways. Many people have had complicated illnesses healed by studying the teachings and practicing the 5 sets of exercises that supplement the teachings. This practice has shown us that when people strive to perfect their character and abide by the principles of “Truthfulness, Compassion, and Tolerance” their bodies and minds can undergo amazing changes. Many people who couldn’t have their illnesses healed by ordinary medicine and were told there was no hope were able to have their diseases healed by practicing falun gong (also known as falun dafa). People with depression, anxiety, even PTSD were all able to find happiness in their lives again through this practice. This practice is all taught in its entirety free of charge online by qigong master Mr. Li Hongzhi. It’s completely free of charge yet it’s so powerful and has benefited millions of people around the world.

Now why haven’t more of the public been hearing about this very powerful practice. Well in July 1999, the CCP (Chinese Comunist Party) started an all out campaign to “eliminate falun gong”. The CCP has used violent tourture, murder, propaganda and imprisonment of anyone who practices. People in China can face up to 15 years of jail time for practicing and people have been tortured to death for their belief that truthfulness, compassion, tolerance are correct. The CCP has used various forms of slander to justify their persecution and to fool the world’s people. What people don’t realize is that the CCP has never been honest and has lied to its people and the world since it first came to being. The CCP even has a campaign to suppress falun gong all over the globe. According to defectors from the CCP they have been using different internet entities to slander the practice for no reason. Truthfully this is just like Hitler’s gestapo in modern times. It has to be stopped!

Now why would such a good thing that’s taught for free be held from the people? Well, ever since the practice has been imparted to the public over 100 million or more people have benefited from it in China alone. China had 1.3 billion people at the time so that would mean that 1 in 13 people had practiced it. At the time CCP leader Jiang Zemin saw this practice was gaining popularity really fast and that it even outnumbered the popularity of the members of the CCP that were only 70 million, and that it might become more popular than him, since he thought that era was supposed to be all about the him and the party. His selfishness, hatred and inconsideration of the fact that this has benefited the public by raising morality and improving people’s health was none of his concern and so he started his campaign to “eliminate falun gong”.

In an authoritarian government, they control everything, including your thoughts, beliefs and what you do. Including all the sciences and literature available. If a science experiment does not agree with the CCP, it’s not published and is quickly denounced by political “scientists”. Even when falun gong was being spread in China, the comunist party had a special division specifically made to handle research in different qigong systems called The Chinese Qigong Research Society. Their goal was to set up branches at the various sites and set up membership fees so that the CCP could profit off falun gong and other such practices. But the founder of falun dafa Mr. Li did not agree as he wanted the practice to be loosely organized and be spread free of charge and for there to be no political connection. The practice since then has spread by word of mouth and from person to person all around the world and practice sites where people can come learn the practice have been set up all around the globe.

In parts of the “free world” authoritarianism is practiced in a more subtle way. We don’t see violence here, but we do see things like media control, censorship, propaganda. They have been istiling hatred and blaming the problems on the unvaccinated, censoring the truth about natural immunity and if any specialist says otherwise they lose their jobs and could face charges. Is it right for politicians to be the one voice to judge without taking anything else into consideration? The People who want to fight for the truth in any part of society are always the ones who suffer the most. We need to stand up and question people’s motives. In a time like this in our world people are all obsessed with having power, money and control and are willing to do and say anything for it, even at the cost of the lives of others.

Not many are willing to give up everything for the truth since it seems like it’s come to the point where, to really go after the truth, you really have to be able to give up everything and be willing to give up for others. We can’t judge the people who have been fooled by the mainstream media, it’s not their fault. The truth belongs to those who can accept it. My hope is that we can all strive for Truthfulness, Compassion, Tolerance. If you would like to learn the practice yourself for free or to sign a petition to end the persecution, visit www.falundafa.org or www.faluninfo.net.