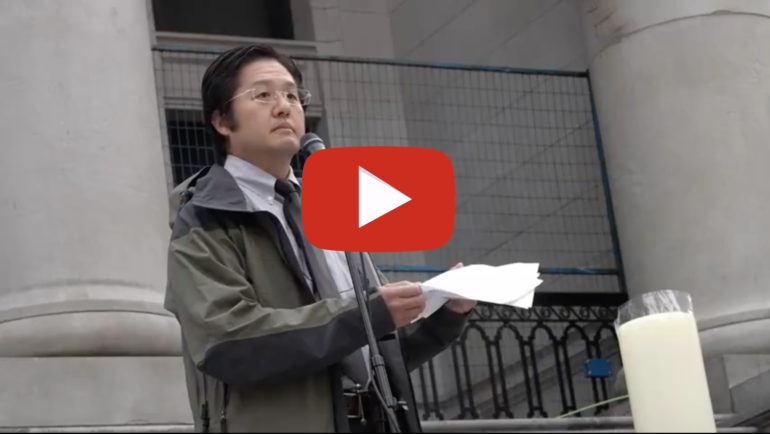 On the steps of the Vancouver Art Gallery on October 1st, 2021, celebrating the 75 Anniversary of the Nuremberg Code, emergency room doctor, Dr. Daniel Nagase, gave this powerful speech detailing what happened after he gave Covid patients Ivermectin in a small hospital west of Red Deer. (Video below)

“It is wonderful to see all of you here remembering Nuremburg. And that’s the key here, remembering. Not just the nurses and doctors that are helping by speaking the truth, people like Dr. Charles Hoffe in Lytton, but also to remember the doctors in hospital administration, the doctors at the college of physicians and surgeons, the doctors you see on TV that are standing in the way of life saving medications.

Let me tell you what happened in Rimbey Alberta, a small-town a couple hours west of Red Deer. It shocked me. I started on Saturday morning in the ER, and when it came time to round on the ward patients, the charge nurse informed me that 3 of the patients on the COVID wing had deteriorated overnight. All the patients were on oxygen and extremely short of breath. The only medication these patients were on were steroids. A medication that will decrease inflammation but increase the chances of a bacterial infection by suppressing the immune system. That’s right, the only medication the covid patients at this hospital were on were immune suppressants.

One woman said it felt like we just put her in a corner to die. We weren’t doing anything for her. I told her, I can’t speak for the usual doctors during the week, but it’s the weekend, and I’ll do everything I can to help. I offered Ivermectin. She wanted to try it because she heard nothing but good things about it. All 3 patients wanted to try ivermectin. The hospital didn’t have any, so we had to ask Red Deer Hospital’s Central Pharmacy for the medication. They refused to send Ivermectin.

So, we checked the local pharmacies. And God bless that charge nurse, although both pharmacies in town did not have ivermectin, there was one pharmacist who would do everything he could to get some -even if it took all day.

We didn’t have all day, my patients were sick. So I started everyone on the next best thing, Hydroxychloroquine, which the hospital did have. I also started Vitamin C, Vitamin D, and Zinc. And because the patients were coughing and short of breath, I gave them inhalers… Salbutamol and Flovent, the same inhalers that have been used for asthma for over 50 years. I also gave them Azithromycin.

Surprisingly by late afternoon, the town pharmacist finally found some ivermectin. He couldn’t get it from his usual chemical supply, because it was a Saturday. He had to get it from an agricultural supply. He checked to make sure that it was the exact same Ivermectin a pharmacist would give to a person, brought it back to his pharmacy and checked it again. He then called me with the good news. I handed Ivermectin to each of my 3 patients with their exact dose of according to their weight. And you’ll never guess what happened next.

Within hours of getting Ivermectin, I got a call from the Central Zone medical director, Dr Jennifer Bestard. She called me to tell me I was forbidden from giving Ivermectin to patients. I told her she’s never met the patients, she’s not their doctor, and had no right to be changing the care of my patients without the patient’s permission. She said Ivermectin was forbidden from the hospital. Even if the patients had their own Ivermectin (which I would have happily given to a relative so they could to hand it over to them), patients would not be allowed to take their own ivermectin.  She said it was a violation of Alberta Health Services Policy to give Ivermectin for COVID. But that wasn’t good enough.

The next day she called the hospital and gave me 15 minutes notice that I would be relieved of my duties. I told her that it was unreasonable. I had an emergency department full of patients who can’t be sorted out in 15 minutes. An hour later another local doctor came to replace me. They didn’t even want me to check up on the patients who I gave Ivermectin to. Not even 24 hours after getting Ivermectin, 2 out of my 3 patients were almost completely better. They were out of bed walking around and all the crackles I heard in their lungs from the day before were gone. All it took was about 18 hours and 1 dose of Ivermectin.

The third patient, who was 95 years old, stayed the same. She didn’t get any worse like she had done the night previous. I found out later that no sooner had I left Rimbey hospital, the next doctor who came to replace me stopped the antibiotics, stopped all the vitamins, she even stopped the patients inhalers. Within hours of my leaving the hospital this doctor even took away the patient’s inhalers, to help her breathe. The patients were not even allowed vitamins.

Thankfully, both my 70-year-old patients who had immediate recoveries after a single dose of ivermectin left the hospital that week.

I’d like to speak briefly to the healthcare professionals in the crowd: no doctor would take away antibiotics and inhalers for ANY viral pneumonia, never mind COVID. No doctor would do that to ANY patient with a pneumonia. Unless they were… Well I’ll let you think about that. We are remembering Nuremburg after all. And for healthcare professionals, I want us all to think very deeply about that.

But it gets worse. In my brief day and a half in the small town of Rimbey, I saw 2 patients who had recently been discharged from Red Deer Hospital after being on the COVID ward. They were sent home with NOTHING. Not even an inhaler.

These patients ended up in ER at a small hospital wanting help. Just days after being sent home from a tertiary care hospital with nothing.

There is something malicious going on. I hope you can all see the bigger picture. This is more than me having all my assignments to take care of small communities cancelled for the rest of the year. This is more than the medical director, Dr. Fraincois Belanger banning me from hospital practice throughout all of Alberta.

Just a week after I filed a complaint that Dr. Gerald Lazarenko was withholding a lifesaving medication from an entire province, the Alberta college of physicians and Surgeons forbade doctors and pharmacists from giving patients ivermectin.

We must remember.  We are here to remember.  Not just the people who died from medical experimentation.

We are here to remember every doctor who stopped patients from having a live saving medication.

And what for? To boost mortality? To create an ICU “crisis”? To create a state of emergency? All to push… a vaccine?

*Dr. Daniel Nagase has been a doctor for over 15 years. He graduated from Dalhousie Medical School in 2004. He has been an emergency doctor for 10 years and has been working in rural underserviced communities throughout Alberta since 2015.

*Alberta Health Services (AHS) confirmed the details of this story on their official Twitter account and to CBC Edmonton.

*To date, no Ivermectin deaths have been reported. An expert review of 500+ sources and papers in 2021 by world prominent toxicologist Dr. Jacques Descotes, MD, PhD, concluded that “hundreds of millions of human subjects have been treated with ivermectin… the safety profile of ivermectin has so far been excellent” No death or serious side effects were observed in this review, which included multiple overdoses up to 100 times the recommended therapeutic dose.