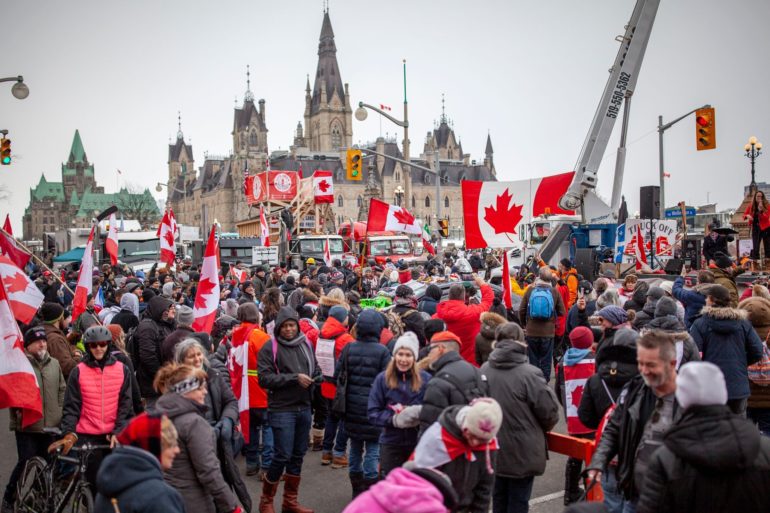 After 2 years of living under an authoritarian government, truth and freedom were starting to seem like a lost cause. Then suddenly, Canada became the flash point for turning world opinion.

Printed in the March 2022 Edition of Druthers Newspaper

Thank you to the Canadian people. Thank you to the Canadian truckers. After witnessing one of the most beautiful displays of truth, love, and freedom in the days following the 70-kilometer-long convoy arriving in Ottawa (the biggest truck convoy the world has ever seen), January 29th may forever be marked in the unofficial history-books-of-the-people as “Freedom Day.”

After 2 years of living under an authoritarian government, truth and freedom were starting to seem like a lost cause. Then suddenly, Canada became the flash point for turning world opinion. This was achieved by showing the world that working class people can stand up to the powers that ought-not-to-be.

While those involved were well aware of what was happening on the ground, the mainstream narrative tried to spin a very different tale. The following is a list of five ways the powers that ought-not-no-be tried to rewrite the history of the freedom convoy.

Early on, before their arrival in Ottawa, it was reported that the OPP stated they witnessed only 113 trucks passing through Thunder Bay. This number was parroted on just about every mainstream news station. The reality is, this was the biggest truck convoy the world has ever seen. According to Guinness World Records, the previous world record for the longest truck convoy was in Egypt in 2020. The convoy had 480 trucks and was 7.5 km long. The Western wing of the Canadian convoy, on the other hand, was over 70 km long—if the same math were to be applied, this would be approximately 4,480 trucks coming from the west alone—although likely many more since the majority of the Canadian convoy trucks were not hauling a trailer, and many more trucks also joined in from the East and the US.

Despite our prime misinformationister Justin Trudeau calling the convoy a “small fringe minority,” the protest itself was also huge. Many tens of thousands or even hundreds of thousands of people showed up in Ottawa. The protest also persevered: 2.5 weeks after the truckers arrival, Ottawa police announced there were still 418 trucks just in the downtown core alone (and hundreds to thousands more in fields in the surrounding area). Thousands of protesters remained until the 3-week mark.

While the convoy officially started in BC, truckers came from far and wide. The Alberta-US border crossing, for instance, was gridlocked with an absolutely amazing horizon of trucks everywhere, proudly flying their Canadian flags. The whole border crossing at one point completely shut down, reminding us that we all depend on truckers more than we know on a daily basis. They bring everything to us.

The whole convoy was really an astonishing site to see across Canada. It even inspired other truck convoys in 34 other countries including Italy, Israel, Australia, Argentina, Austria, Cyprus, New Zealand, and the United States.

2) They painted the protesters as “racist,” “violent,” and “hateful” when in reality this was one of the most loving, accepting, and peaceful protests in recent history.

Immediately after finding out the truckers were on their way to Ottawa, Justin Trudeau disappeared to “self-isolate” after being diagnosed with COVID (despite being triple jabbed, supposedly). Before the protesters even arrived in Ottawa, Trudeau announced that the protesters had “unacceptable views.” Three days after their arrival, while still in hiding, Trudeau made the following brief statement about the protest:

“I have attended protests and rallies in the past when I agreed with the goal, when I supported the people expressing the concerns and issues; Black Lives Matter is an excellent example of that,” he said. “But I have also chosen to not go anywhere near protests that have expressed hateful rhetoric, violence towards fellow citizens, and a disrespect, not just of science but of the frontline health workers.”

Firstly, he just said he supports protests when he agrees with what they’re protesting about and the methods by which they protest, like Black Lives Matter. Let’s just remind ourselves what Black Lives Matter protests really look like: lots of businesses were burned down, store front windows were smashed in, cars were ruined, statues got toppled, there was a lot of property damage. There was looting, riots, and, in the US, multiple people were shot, some died. Trudeau’s childhood home, Montreal, was particularly hit hard by the property damage and looting. Meanwhile, before being forced to resign, Ottawa Police Chief Peter Sloly announced the freedom convoy saw no injuries, no deaths or riots, despite tens of thousands of people demonstrating 24 hours day for weeks.

The Black Lives Matter protests were in no way more peaceful or less violent or hateful than the Trucker protest, yet here you have Justin Trudeau saying BLM was peaceful, but the truckers’ protesters are not. Why the double standard? If he can separate the rioters from the BLM protesters, then he should be smart enough to separate the 2 men who briefly showed up with pro-authoritarian flags of hate from the anti-authoratian/pro-freedom protesters.

That’s right, the only evidence Trudeau was able to cite to prove the protesters were “hateful” and “violent” were two men (one with his eyes covered, the other in a full ski mask) who very briefly arrived with a swastika and a confederate flag, among tens or hundreds of thousands of protesters.

What Trudeau did was a grotesque attempt to try to rewrite what was probably the largest and most peaceful and well-organized protest in all of Canadian history. It’s comical how the government and the mainstream press demonized the entire movement based on these 2 bad actors, while ignoring all the love and hope on the other side of this. We’re all smart enough to know that if you are one of these government/corporate owned media companies that really wants to spin a tail, you just give 50 bucks to a homeless guy to carry a hate flag through a crowd, you film it real quick, and then you scurry off.

Here is what the protest really looked like: smiles, singing, dancing, drumming, children jumping in bouncy castles, tents of food to feed the truckers and the homeless, and lots and lots of hugs. The only violence in Ottawa was what was done to the protesters, not by the protesters. The protesters themselves were all about peace, love, and unity. That was the whole point. To end segregation and show the world what humanity looks like.

The government and legacy media were not the only ones trying to rewrite history—even Twitter tried to bend the truth. #6 trending on Twitter the first week of the protest was #IStandWithTrudeau with 4,780 tweets, and coming in just under that at #7 was #TruckersForFreedom2022 with 158,000 tweets. Of course, they wrote that as 158K to fool some people. This is a prime example of Twitter playing around with the algorithms to bury stuff their pockets don’t agree with. It’s times like this that we realize what we are up against: a systemic big media, big government, big narrative approach that has a point of view, and that point of view doesn’t include the working-class people.

CBC even went so far as to suggest that Russia was behind fuelling the entire convoy.  CBC host Nil Koksal made this allegation on January 28th when speaking with the Minister of Public Safety Marco Mendicino. Of course, there was absolutely no evidence for this.

There was a lot of violence during the biggest police operation the country had ever seen, but the violence did not come from the protesters, it came from the police. While the Ottawa police’s statements and social media feeds told one story, boots on the ground feeds, such as Druthers’ Facebook livestreams, showed protesters were beaten with batons, sprayed with pepper spray, and shot at with tear gas canisters, all while snipers and other police guns were pointed at them.

In one particularly disturbing scene captured during a Druthers livestream, a Mohawk woman who used a walker was trampled by police horses, breaking her clavicle and bruising her ribs, hip, and back. When the Ottawa police responded to the concerned public about the incident on Twitter, they claimed “Anyone who fell got up and walked away. We’re unaware of any injuries. A bicycle was thrown at the horse further down the line and caused the horse to trip. The horse was uninjured.”

After examining footage from different angles and hearing from witnesses, it appears the “bicycle” the tweet was referring to was actually the woman’s walker. And when they say “anyone who fell got up and walked away,” what they meant was: “someone who fell went to the hospital.”

If the past year has confirmed anything, it is that the mainstream media and our own government are thoroughly dishonest. Yes, most people already suspected this, but the last 12 months have provided more confirmation than the past several years combined. 2022 has made it abundantly clear that its really the political and corporate elitists, from big government to big pharma, who are in charge of crafting the narrative. They are the ones who have the financial means to rewrite history to make them look like “the good guys” and the people they are crushing looking like “the bad guys.” This is why independent media, like Druthers, is so important. Its when we look to the boots on the ground and hear the voices of people who were actually there, can the real story be told and shared with the world.